Body Dysmorphia and Me

Mandy talks about her battle with a warped self-view, and learning to see ourselves as we really are.

Article originally published on Ketovangelist.com on 1/12/18. It has been lightly edited for re-publication. 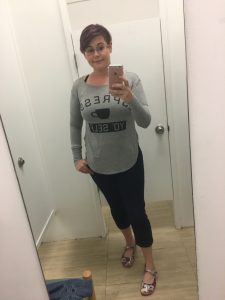 Right now, I wear a US women's size four, most of my clothes are from the petite section, and my most recent pants purchase was actually a size two. Logically, I know I'm not fat, and I'm sure it's plain as day to anyone other than me. However, when I look into the mirror every day I still see this: 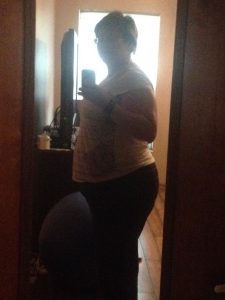 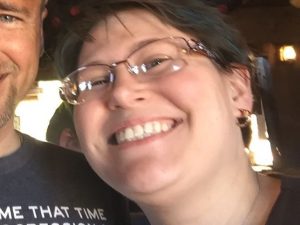 To be perfectly honest, that's how I've seen myself since I was a fairly young teen (i.e., the days when I was not only thin but borderline scrawny).

I'm not a shrink- nor do I play one on TV- but psychology was my field of study back in the day, and I know enough about it to realize that my own perception about my appearance is one, big pile of disordered thinking. I personally classify it as a kind of casual form of Body Dysmorphia; a type of disordered thinking, wherein a person perceives his or her appearance in a way that does not align with reality.

What is Body Dysmorphia?

There is an actual, diagnosable mental disorder called Body Dysmorphic Disorder that is pretty severe. It features a serious preoccupation with physical features that one perceives as being flawed in some way- flaws which are usually either imagined or wildly exaggerated in the sufferer's mind- and many go out of their way to hide said flaws, many times to the point where it is actively disruptive to their lives. This official diagnosis is considered to be on the OCD spectrum, and it's estimated to affect around 2.4% of the population, although those estimates may be off. BDD isn't easy to diagnose, since many symptoms are comorbid with other forms of disordered thinking and behavior, and it's speculated that sufferers don't tend to seek treatment or self report this type of thing.

Are my own symptoms are severe enough to qualify as being officially BDD? I don't know. Aside from just being generally annoyed at feeling fat, it doesn't negatively affect my life to an extent that I've sought out any treatment, and I do recognize the behavior and logically know I'm being irrational. However, more serious sufferers should absolutely seek help from a qualified mental health professional.

What I can say is that I recognize these tendencies in myself. Aside from seeing an obese person in the mirror, I am in the habit of hiding behind purses or pillows or blankets when I sit, so as to keep anyone from seeing my belly fat. Whether or not that behavior is simply a habitual relic from my obesity days, it's one that remains and I have to consciously make an effort to stop doing it. I also slump pretty badly, again as an attempt to hide my body from view, and I'm working on correcting my posture when I remember to do so.

I can also say that I see these tendencies manifest very frequently in the thinking and actions of the people with whom I interact, both privately as a coach (when I was coaching) and in the larger family of Ketogenic Success Facebook groups. Many, many people I encounter on a daily basis have very skewed ideas about their physical appearance. I do wonder if it's just the nature of being a part of the health and fitness community. Do people become health conscious because of a tendency to Body Dysmorphia? I don't know the answer to that, but I think it's a question worth pondering. Obviously this is anecdotal, but it certainly feels like it's occurring significantly more frequently in our community than the estimates amongst the general population bear out.

So What Can We Do About It?

For starters, to anyone reading who is experiencing these thoughts, feelings, and behaviors to a point where it is actively negatively impacting your life, I implore you to seek help. Suicidal thoughts are statistically higher amongst those suffering from BDD, and according to the Body Dysmorphic Disorder Foundation, a quarter of BDD sufferers reported at least one previous suicide attempt. Clinical BDD is no joke, so if you suspect you may be suffering from it, please, please, please seek help.

For those more like me, who have a measure of disordered thinking about their bodies but it isn't severe enough to cause major disruptions, you may still want to seek out a mental health professional for help finding productive ways to correct your thinking and behavior. Things that help me work through my disordered thoughts and feelings are tracking my measurements, clothing sizes, and taking a lot of photos for comparison with my "before" shots. Being able to put these measurements side-by-side and see the difference between then and now helps tremendously. As I said before, logically I know I cannot possibly still be obese, so engaging in positive self-talk about my appearance helps tremendously.

It also helps to intentionally put myself outside of my comfort zone. I could happily spend my days curled up in mumu-style pajamas hiding under a blanket. Instead, every day I intentionally get up and get dressed, and fix my hair and face. I buy clothes that are fitted so I can't hide behind comfy tents, and then I wear the heck out of them. I do things I always wanted to do but was afraid to, like chopping off my hair and dying it purple, or rocking a swing-style dress with monster stilettos. Not only does it keep me from hiding and reinforcing those behavioral tendencies, the compliments I receive on my appearance also help to solidify in my head just a little bit more the fact that I am no longer obese.

Over time, consciously practicing these things has diminished my disordered feelings. They're not gone, and there are many days I still struggle with the distorted image I see in the mirror. But until I can get up and no longer see myself as obese, in the words of King Ezekiel, I'm gonna fake it until I make it. I believe that one day I will.

Regardless of the severity of symptoms, if you suspect you might be suffering from some degree of Body Dysmorphia, know that you are not alone and there is help and healing. For more information, check out the Body Dysmorphic Disorder Foundation.