Consistently under-fueling your body does long-term damage to your metabolism.

Article originally published on Ketovangelist.com on 8/15/17. It has been lightly edited for re-publication.

Imagine you're a pilot.

You report to the airport, and make your way to your plane for a flight from L. A. to Hawaii. At some point, long after take off, you make a rather alarming discovery: you are running dangerously low on fuel. They must have miscalculated the fuel you'd need to make this flight back at the airport, you're too far along to be able to turn around and go back, and now you're faced with quite the dilemma.

How on earth are you going to make it to Hawaii?

Assuming your idea of a good time doesn't include crashing into the Pacific, there are some things you can do to make your gas go a little further, but not many of them are going to be pleasant.

You could dump all your cargo to make the plane lighter. Corporate's gonna love that! You could turn off the air conditioning and other creature comforts to conserve energy, although the people in the back are going to be ticked. You could cut power to the cabin. Sure you'd kill the passengers, but you would make it to Hawaii.

None of these things is particularly desirable, they're going to net you a whole lot of paperwork, not to mention a whole pile of angry humans and their families. No matter what you choose, you're probably not gonna have a good time.

Funnily enough, we can easily see how important it is to provide enough fuel for our air transport- and how disastrous the consequences will be if we don't- but it's pretty common amongst many in the diet and nutrition community to completely neglect adequately fueling our bodies. In fact, large segments of "experts" actually encourage people to purposely cut back on fuel. Waaaaay back.

Our bodies may not be airplanes, but it's just as nonsensical to deprive them of essential energy as it is to under-fuel a plane.

A while back, Dr. Fung wrote a great piece on The Biggest Loser diet, and why it seems to have so epically failed to yield long-term, sustainable results for its many contestants. You should go read that now. We'll wait.

The result? A highly damaged, and very slow metabolism. Likely accompanied by feeling cold, tired, and cranky, with a potential side of mental illness if it goes on long enough.

Those TV show contestants spent a good amount of time in a state of starvation or (hopefully more likely) semi-starvation, and their metabolisms dropped off to compensate. All of which explains why many of them, ultimately, cannot maintain their weight loss.

So, why are we going on about airplanes and starvation, you ask?

Charts and Graphs and Calculators, Oh My!

If you frequent our Facebook groups- or any part of the ketogenic community, really- you've probably seen the following chart  or something similar floating around: 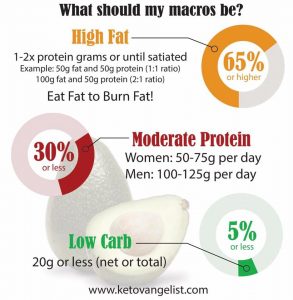 This chart is something one of our coaches put together at one point to try and help people figure out a baseline for their macronutrient intake. It's generic, and necessarily so, because we have multiple groups with well over 200,000 to 3000,000 members between them. It is impossible for us to tell everyone what their exact macros should be, and we tend to avoid recommending the ever-popular "keto calculators" because we feel (a) many of them are configured at protein levels that are simply too high for the average, sedentary person and (b) people tend to treat them as if they're set-in-stone and will eat to meet those macros as exactly as possible, even when it's not satisfying them or is providing an inadequate intake.

The idea in creating this chart was that people could use it as a baseline, so as to get an idea where to start and then adjust to meet their needs. As we have said many times, no two bodies are the same, so it is up to you to understand what makes a diet ketogenic, and adjust to meet your own, individual needs.

Unfortunately, the result of passing around these kind of charts has been... let's charitably say less than optimal. Many, many people have taken that fat-to-protein ratio (and various other chart-based general recommendations) to heart, and so we still frequently see people who are eating on the low end of the protein range while also trying to keep their fat in that 1:1 to 2:1 ratio. If we look at this in terms of calories (ie, the fuel you're putting into your tank) even in the best case scenario here, wherein someone is eating 50 grams of protein a day and doubling that in fat grams, this sample person would only be eating 1200-ish calories a day.

Now, we want to tell y'all something: We hate talking about calories.

So many people waste so much time and energy chasing calories when calories aren't even a thing. They're a unit of measurement. They measure heat energy, to be exact. So, because calories are just a measurement of heat energy and aren't really anything tangible, we don't like spending much time focused on them and potentially reinforcing the calorie obsession that's so pervasive amongst, well, pretty much everyone. However, because providing our bodies the proper amout of fuel is so important, we're going to have a little caloric discussion.

How Much Is Enough?

The human body is, on average, meant to use anywhere from around 1800 to 2500 calories of energy a day, depending on your biological sex, your body size, and your muscle mass. If you're even lightly active, you will probably burn much more as long as your metabolism is functioning properly. Under the 2:1 fat-to-protein example given a few paragraphs ago, this sample person is eating at semi-starvation levels. This hypothetical body is going to tank its metabolism, while simultaneously refusing to burn any reserve energy and, in fact, it might actually conserve as much as it can by adding body fat, all in order to keep itself alive.

Other consequences of chronically under feeding your body are things like messed up hunger signals. This explains why many of the people we are see that are barely fueling their bodies, day after day, are so insistent that they're simply not hungry. When our coaches encounter people who have been consistently under eating for extended periods of time, it can be a struggle to get their intake up to sustainable levels, and it takes a while for hunger to re-normalize.

The lesson here? Don't starve yourself.

We want you to know that not one of our coaches eats at these semi-starvation levels.

In fact, the majority are pushing 2000 calories and beyond, pretty much daily, and have all been pretty wildly successful. We have said over and over, ad infinitum, that a low-carb protocol is not a starvation diet. Weight loss and gain has less to do with how much energy you're failing to take in daily, and quite a lot to do with your hormones and how they're handling the use and storage of that energy. If you have some time, check out Dr. Fung's Aeitology of Obesity lectures, or read his book The Obesity Code for excellent, scientific explanations as to how this all comes together.

For now, what you need to know is keto is not a way of eating on which you need to do a lot of conscious caloric restriction. When we tell you calories don't matter and eat to hunger, what we're saying is you don't have to eat at semi-starvation levels to lose weight. We want you to eat to live, but you need to understand that part of eating to live means your body needs fuel and if you're under fueling it, day after day- just like the pilot that's faced with a series of bad choices to make it across the ocean on too little gas- your body has to make some unpleasant and undesirable choices in order to keep you alive.

That doesn't mean you have to eat 5000 calories a day. While there was a short-lived super-high-calorie-movement a while back, that was never intended to advocate for people to regularly eat that much. It was mostly meant to provide a real world experiment to prove Dr. Fung's point about hormones being in the driver's seat of weight management, and to emphasize that the quality of what you're eating is significantly more important than the how much part. So, this is not an excuse to gorge yourself, OK? Just don't starve yourself, either.

Putting It All Together

Every body is different and you have to work to find your own balance. What works best for your body- how much protein you need, how many carbs you can tolerate, and how much energy you need to adequately fuel yourself- is going to depend on you. Don't take the macros on a chart- or on some "expert's" keto calculator, either- as a set-in-stone gospel. There is no formula that you're going to follow exactly, every single day, and magically lose weight. What you can do is take those recommendations into account and use them as a starting point and tweak from there to meet your own, individual needs.

If, at some point, you get stuck or have trouble figuring things out, that's what those four support groups are for. That's also what coaching is for. Don't be afraid to reach out and ask for help. Next week, we're going to talk about the difference between fasting (with feasting!) and eating a chronically low calorie diet. Stay tuned!