Recipe originally published on KetovangelistKitchen.com on 2/14/19. It has been lightly edited for re-publication. 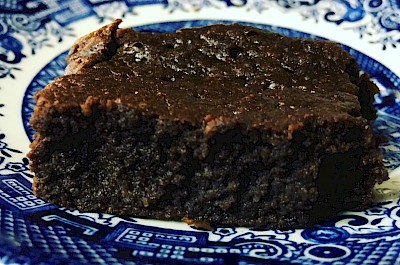 It's Valentine's Day, y'all, and because I like you, I've decided to share my best brownie recipe with you fine folks.

There might be no food more perfect than a fudgy brownie, and I spent several weeks working on this recipe so as to get it just right. Many keto brownies, even those that boast of being "fudgy," tend to dry out as they stand, and my goal was to devise a recipe that would maintain its fudginess, even overnight. So, I enlisted the help of a few very willing beta-testers, and got to work on what is now officially my own favorite keto brownie concoction.

To prove my brownie-baking prowess, I personally tested this recipe out on a pretty hard crowd: a group of hungry, camping kids. I brought a big, double batch of these beauties on a family camp out, and came home empty-handed (they didn't make it a full 24-hours, y'all). These non-keto kids and adults devoured them in short order, and were handing out brownie compliments left and right. I knew at that point I had a winner.

Notes: All of my beta-testers were thrilled with the end result and, funnily enough, one of them discovered (entirely by mistake) that you can turn this recipe into a cakey brownie (for those that prefer them that way) by making one simple substitution: replace the gelatin with collagen peptides. This particular tester liked it as a cake so much that she make it a second time for a family gathering, and topped it with some keto-friendly chocolate icing. She insists it reminds her of the Hershey's chocolate cake and icing she used to make from the recipe on the back of the cocoa powder container.

Hey, if one of my recipes is being compared favorably to Hershey's, I'll take that in a heartbeat.

Another tester, on a successive bake, added some chopped walnuts and Lily's baking chips (which is awesome, BTW). As always, I try to make my recipes flavorful, but as easily customizable as possible, so feel free to throw in your favorite brownie add-ins and make it your own.