Recipe originally published on KetovangelistKitchen.com on 7/2/19. It has been lightly edited for re-publication. 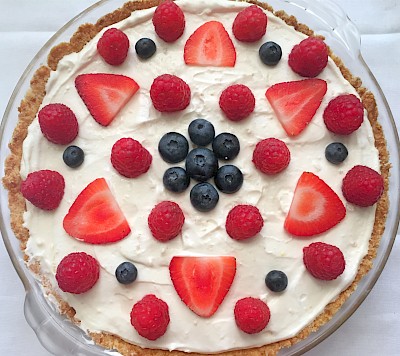 I recently came across an old recipe I had for a lemon icebox pie I used to really enjoy during the summer, especially around Independence Day. It was super easy to put together, and super tasty, but it had crushed, sugary cereal for the crust, cool whip, pudding, and an absolute TON of berries on top. I mean, this thing was covered. Not a spot of the filling shown through.

The pie was beautiful, but obviously not keto-friendly, so I decided to revamp a bit. I swapped out the cereal crust with one made from almond flour mixed with Swerve brown, pressed-in and baked to set. I decided to go more of a cream cheese route instead of making pudding, used one of my go-to ingredients (gelatin) to help it set up, and decided to go lighter on the berries while using them strategically to get a pretty, colorful pattern to garnish.

It turned out lemony and wonderfully creamy, and so this is one dessert I'll definitely be bringing to this year's celebration on the Fourth.