Proper corn bread a Southern keto practitioner can live with! 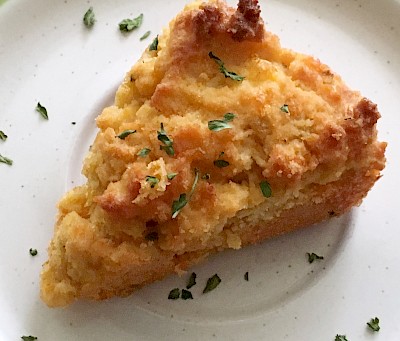 Ahhhh, cornbread. It's a staple down here in the Southern United States. Funnily enough, even though it's fairly popular across the whole of America, in my considered opinion, what most people outside of the South think of as cornbread simply isn't. If you think of that sweet stuff that comes from the little blue-and-white box of Jiffy mix when you think of cornbread... well, I hate to be the one to break this to you, my friend, but that's not cornbread. That is what we here in the South refer to as cake.

Real Southern cornbread is not—I repeat, is not—sweet. Real cornbread is made in a skillet, usually rubbed down with bacon grease and preheated in the oven, has a crispy crust, and is savory (sweet "cornbread" is cakey, and basically none of those things). All of which makes simulating cornbread on keto a bit of a challenge.

As most of us who have done any keto baking have long ago discovered, nut flours simply do not behave the same way as a starch. Yes, they brown and can provide a similar body and mouthfeel as many starch-based baked goods. But they brown (and burn!) very quickly, making it much harder to get a properly crispy crust, and because they can't help but impart some of their nutty flavor into your dishes, the taste can be off. There is also the issue of rise, in that we tend to depend heavily on egg to do the work of providing a lift to keto-friendly flours, which leads to lots of complaints about our baked goods always being a little too "eggy" for most folks' tastes.

Well, my friends, none of that is the case today.

In this recipe, I use a combination of two nut flours to provide the bulk and absorbing power needed, but the trick to making this a savory success, with a crisp crust, is pulverized pork rinds. In the South, Cracklin' Cornbread (cornbread made with ground up pork rinds or pork cracklings) is a thing. Pork rinds are just puffed up pork skins, and when they are used as breading they crisp back up beautifully, while also lending a subtle but savory flavor. They work the same way in this recipe, providing the crisp to the crust, which starts as soon as the batter hits that hot, greased skillet.

Now, my personal preference is for a Tex-Mex-style cornbread, which usually has some form of chili peppers or jalapenos, and cheddar or pepper jack cheese. That's why there is a little bit of salsa verde in this recipe. If you want it spicy, feel free to swap out for minced jalapeno (spicy jalapeno cornbread, BTW, is phenomenal with a smear of sugar-free strawberry preserves). If you don't like the peppery kick, that's ok. Just leave the salsa verde out. It will still be fabulous!

Of note: I store any leftover wedges of sliced cornbread on the counter for a couple of days in zip top bags. This cornbread is super crispy on the outside right out of the pan, but don't let that fool you into thinking it's dry. The collagen in the pork rinds also holds in a lot of moisture, so the inside of your bread will be tender and delicious. This also means that as it stands covered, the outside will lose some of its crisp.

The easiest thing to do is toast them back up in the oven or a toaster oven for about five minutes at 350 degrees F. Voila! Crispy cornbread crusts are here again.

Of course, that assumes you have leftovers.

Proper corn bread a Southern keto practitioner can live with!