Recipe originally published on KetovangelistKitchen.com on 11/17/21. It has been lightly edited for re-publication. 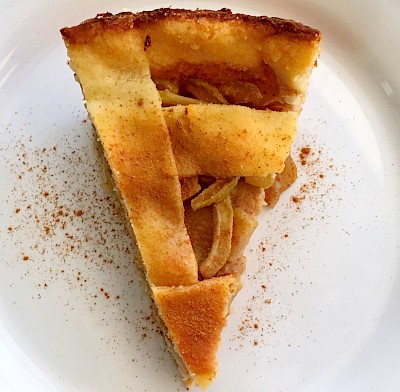 This recipe was inspired by a passing comment made by my sister-in-law at Thanksgiving (love you, Megs!). We'd swung by their house to visit later in the evening (post our keto feast), and they were serving dessert. She said something along the lines of how there was little that was as enjoyable as a good slice of apple pie, and at that moment I knew I had to make one.

Now, I've made ketofied versions of apple crumble and sort-of pie before. There are some very good recipes out there, too. What separates this pie from the pack is the crust. I used my Salted Caramel Pie Crust recipe to not only make the bottom, but to also do some very pretty- and very traditional- lattice work on top. It really took this dessert to the next level.

Obviously there is no apple on keto, so I went the traditional substitute route and used peeled and seeded zucchini. If you'd like to try it with an equal amount of chayote squash (aka, mirliton) feel free. The carb count, gram for gram, between zucchini and chayote is very similar (chayote has one more total gram carbs per every 100 grams), so it shouldn't have any real appreciable effect on that macronutrient.

If you're like me (#teamlazy) and are maybe inclined to skip the fancy-pants lattice topping, that's OK! I would split the dough in half instead of thirds, and use one half for the bottom crust, then roll out the other half to completely cover the top. Brush with egg wash, and cover with a pie shield, as directed, and don't forget to put a few slits in the top for steam to escape. Make it your own, folks!

Notes: I hate the kind of recipe posts that have fifty-gazillion words and pictures to scroll through before you ever get to the dang recipe! However, because some folks may not be familiar with how this kind of thing is made or assembled (especially the lattice part), I took a few pictures along the way so you could get a good visual as to what you're looking for. They are as follows:

Weigh your zucchini after you've peeled and seeded it. It took me two-and-a-half very large zucchini to yield a pound of the prepped insides, so that's a good ballpark place to start.