Delicious Florida gumbo in a creole style to enjoy with gator (or chicken, if you must)

Recipe originally published on KetovangelistKitchen.com on 12/16/18. It has been heavily edited for re-publication. 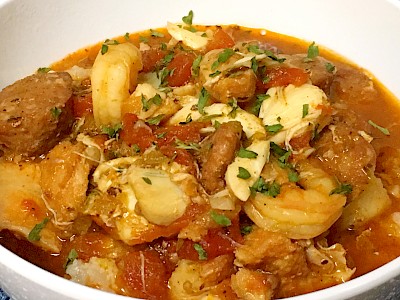 Gumbo is one of those keto Holy Grail recipes. Not because it's particularly hard to swap out for rice or to thicken. It's all because of the roux. There is no real way to make a roux on keto.

I know that's disappointing for some, and there are those who have tried to make one by browning almond flour or coconut flour in oil until it's dark. The problem, unfortunately, is that both of those are essentially ground nuts, and so while you might be able to cook them until they're brown, they're not going to thicken like a wheat flour. Almond flat-out isn't absorbent enough, and coconut may absorb moisture but it doesn't dissolve into a liquid the way wheat does. So, basically, either way you cut it, you're going to end up with gritty gumbo, and that's never made anyone happy.

I solved the grit problem by using two thickeners: the very traditional okra, and glucomannan powder. Now, glucomannan will thicken. I've even had a lot of luck browning it with my aromatic veggies and fats at the beginning of a recipe. But because it's not flour, its not going to turn into the golden (or chocolate) colored pasty stuff that is the mark of a true roux.

It is what it is, folks. I've learned to embrace the glucomannan for what it can do, and not sweat the stuff it can't.

I made this gumbo in a creole style, which basically means it's got tomatoes in it. Gator meat is plentiful here in sunny Florida, and is easily found in the same freezer case as the frozen fish and shrimp, but if you have a hard time locating some—or are skittish about trying it—feel free to swap it out for chicken. The sausage is a specialty item I ordered from Bradley's Country Store, located in Tallahassee, FL. They make, by far, the best sausage I've ever had. Locals actually consider it a bit of a Florida delicacy, but again if you would rather sub it out for a more traditional andouille, or for your favorite kielbasa style sausage, go right ahead!

Delicious Florida gumbo in a creole style to enjoy with gator (or chicken, if you must)