Recipe originally published on KetovangelistKitchen.com on 1/15/19. It has been heavily edited for re-publication. 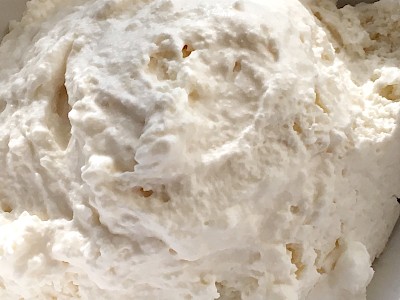 Whipped Topping (or, as most of us know it, Cool Whip) is a very popular ingredient, and for good reason! It stands in for whipped heavy cream but is super stable, meaning it doesn't ever get weepy and lose its air like real whipped cream can over time, with a pretty long shelf-life to boot. It's also what we affectionately call a "Frankenfood." The ingredients list typical to most whipped toppings is as follows:

I especially love that in a product meant to replace whipped cream, it takes us getting to ingredient numbers four and five before we even see the first dairy product. Let's just say I'm not excited about including this product in my ketogenic lifestyle. At the same time, I have a lot of favorite recipes that I'd love to ketofy which contain whipped topping wherein, for structural reasons, plain old heavy whipping cream ain't gonna cut it.

And so I decided to make my own replacement.

This recipe is super easy, and it holds up very well in the fridge, and longer than regular whipped cream will. The secret ingredient that makes this Keto Whipped Topping hold up in the same fashion as Cool Whip is simple: gelatin. As the gelatin sets in the whipped cream, it provides just that little bit of extra structure needed to keep it fluffy and solid over time, and it works very well folded into recipes like gelatin salads, as well as a general topping on hot coffee, hot cocoa, or pie.

Notes: I'm giving ratios per cup of whipping cream here, because this way you can easily scale it up or down, as desired. I personally use a few drops of liquid stevia to sweeten, but if you prefer a different sweetener, I recommend beginning with 1 tsp granulated and adding to taste. Everyone likes their whipped cream a little differently sweetened, so do what works best for you.