Recipe originally published on KetovangelistKitchen.com on 11/22/21. It has been lightly edited for re-publication. 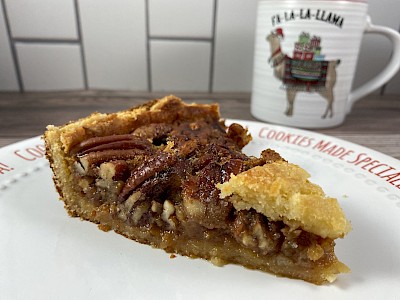 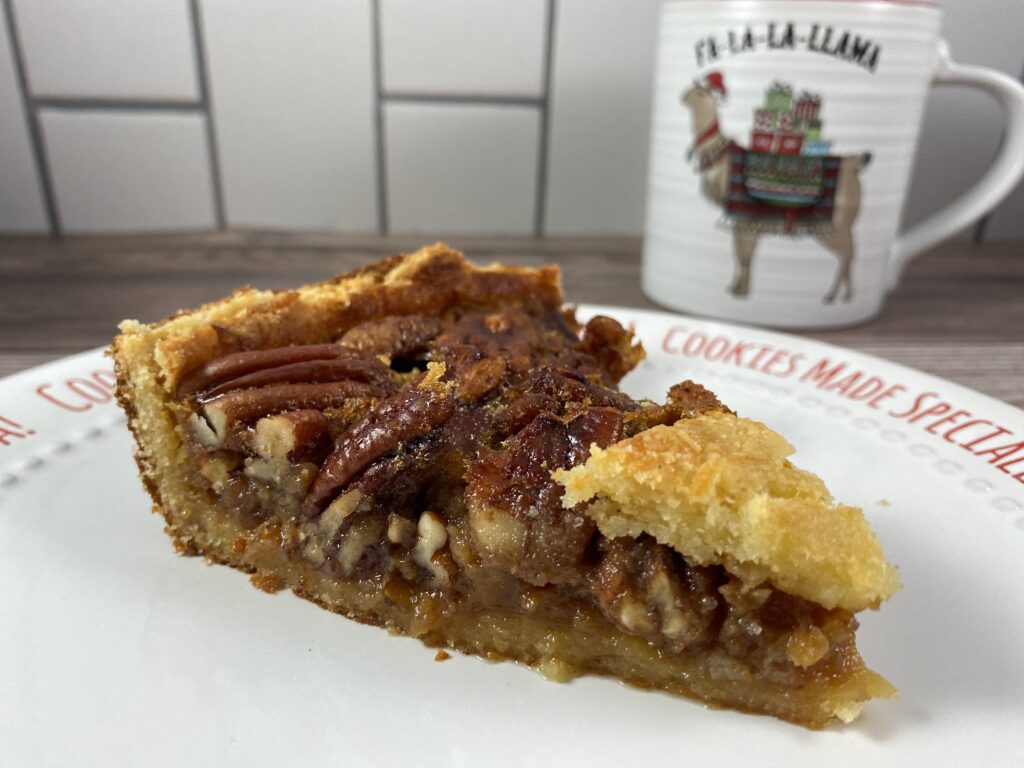 Here it is, y’all. The pièce de résistance!

Yes, I did that. It came to me one day as I was strolling through my local grocer and stumbled upon this beautiful new product: liquid Allulose. As I’m standing there in the baking aisle, looking at this little bottle of joy, it occurred to me that it was within the realm of possibility for this stuff to stand in for the corn syrup in pecan pie. Thus was born this recipe.

Once I had the liquid allulose, the filling part was super easy. It was just a matter of replacing the other sweetener with granulated keto-friendly brown stuff and tweaking flavors a little bit. The hard part was actually the crust. Initially, I thought to do pecan pie bars, but the filling was just so gooey that none of the cakey or cookie type bottom stuff held up. Then I decided on pie proper. It set up beautifully, but my press-in crust dissolved into that gloriously gelatinous pecan filling.

I settled on my Salted Caramel Pie Crust, and it worked wonderfully. It’s very sturdy and held up well enough that I could actually pick up a slice by the crust and eat it with my hands (not that I’m doing that on the regular or anything).  And from here on out, my ketofied Southern Thanksgivings and Christmases are complete.

Notes (there are quite a few, so don’t skip this section): Yes, you need to use liquid allulose. No, there is no working substitute. Sorry.

For the brown sweetener, you can absolutely use Swerve or Lakanto. For the record, I have made this with Swerve Brown several times in trials and it turned out just fine. However, the best tasting trial run was made with Sukrin Gold granulated brown sweetener. Sukrin Gold contains one ingredient (malt extract) of which I am not a fan and don’t really think belongs on a ketogenic protocol. At the same time, outside of my testing phase, I’m literally making this once or twice a year, maximum, and I think that’s unlikely to break my keto bank, so that’s the brown sweetener I recommend in this dish. If you’d rather go with something else, go right ahead. It’s still wonderful.

I added a touch of maple extract just to increase the depth of flavor. Most pecan pies are made with corn syrup (many use the dark kind) or molasses, and because you’re not getting that same, rich favor out of liquid allulose the maple extract helps make up the difference. If you’d like to leave it out, whatevs, just know to expect a much lighter taste.

The macros I calculated include the entire pie crust recipe. There was actually a good bit I cut off, and so if you wanted to reduce waste you can cut the crust recipe by half. It will be a bit thinner than if you made the full recipe, but that’s OK. I actually got a little dorky with my crust scraps and made a little Santa hat cut out with which to decorate my most recent pie (as shown below). If you’d like to use the scraps to do something similar, feel free. I recommend adding the to the top of your pie in the last ten minutes or so of bake time. The pie center may not be fully set at that point, so be very careful when placing them.

Last, but certainly not least, is a bit of a cautionary note. Due to the nature of this pie, it’s going to be very heavy in sweetener. While the NET carbs are pretty low, the total carb count is very high per slice, so if you happen to count total this may be a recipe you want to skip. Even for those who count NET, I recommend keeping this strictly to the holidays. It’s one thing to have a lot of low-carb friendly sweetener on your Christmas and Thanksgiving table. It’s something else entirely to eat like this all the time. Outside of this special time of year, this is not a recipe I would normally post because it is just so dang heavy in sweetener and I don’t like going whole hog in on sweeteners. And because of the abundance of allulose and erythritol (or monk fruit), be very aware that if you dive in and inhale most of this pie by yourself, there will probably be some degree of digestive upset. I advise stopping at one piece at a time.

So, now that you’ve been duly cautioned, on to the recipe.