Recipe originally published on KetovangelistKitchen.com on 1/22/19. It has been lightly edited for re-publication. 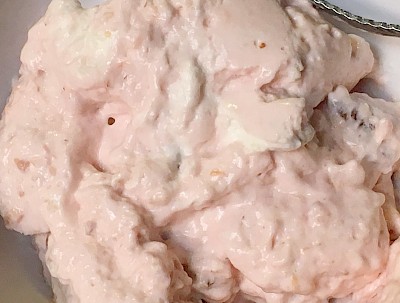 I can't quite express how much I love this recipe. If you've been paying attention recently, you may have noticed I've been spending quite a bit of time re-creating some of my old childhood favorites. Pink Jello Salad, which we in my family know as "Pink Stuff," is just one of those recipes.

Pink Stuff was so dubbed by my cousins. This dish was a staple on the dinner table at my Aunt Robin's house, and her kids began referring to it as Pink Stuff, and the name just stuck. So, that's what we call it here in Paganoland, but it's basically just a classic Jello Fluff Salad.

Now, back in the day, this mess was made with any red colored Jello, a can of crushed pineapple, Cool Whip, and cottage cheese, with nuts and marshmallows usually mixed into the whole shebang. It was delightful, but sweet and chock-full of chemical- and sugar-laden junk.

I have devised a way to make Pink Stuff that requires exactly zero of those nasty ingredients. And even though we are making some things from scratch, like the gelatin parts, to be perfectly honest it really doesn't make that much of a time difference, either. Instead of boiling pineapple and water then adding Jello, we are boiling fresh berries and water and adding gelatin. Instead of blending in cottage cheese, we are blending in sour cream. The only real additional step is making the keto whipped topping, but that whips up quickly in a pinch and can set up in the fridge while you're boiling and cooling the other stuff.

After it sets up in the fridge (just like the "real" thing has to do), you've got a delicious taste of home that serves as a great side to just about any main course.