Recipe originally published on KetovangelistKitchen.com on 9/24/21. It has been heavily edited for re-publication. 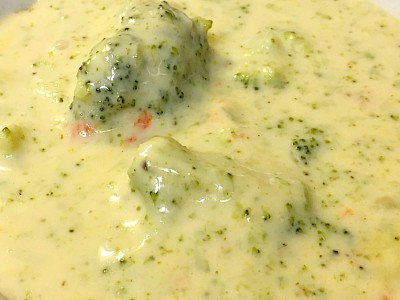 Prior to her ignominious fall from grace, I was a pretty big fan of Paula Deen. In fact, it was watching her cook on the Food Network that drew me into the world of self-education in the culinary arts. Here was this woman who was famous and beloved for her food, and she didn't have to cook all fancy-pants to get there! In a nutshell, she cooked and ate like me.

I went through a spell wherein I collected all her cookbooks, and I even subscribed to her magazine. While it should be obvious to all that her methods aren't exactly keto friendly, after I left carbland I quickly concluded that the style and flavor was salvageable, and set out to do so. Taking many of her ideas and translating them to a keto-friendly framework is how I came up with some of my family's early keto favorites on my journey. This recipe happens to be one of them.

I'm a huge fan of cheddar soup, and good old Paula had a great recipe in her very first cookbook. Now, this recipe included a whole pile of things that are not even remotely friendly, like flour, milk, and onions in a quantity per serving that were a bit on the absurd side. I made this recipe friendly by swapping out and scaling back those ingredients, while making it my own- and into a more complete meal- by transforming the whole shebang into a thick and creamy broccoli and cheddar soup.

Recently, I decided to experiment a bit with adding my konjac/glucommanan powder to the butter and sautéing onion to see if it could be used in place of flour when making a roux. Happily, it worked beautifully, and I began my roux experiment with a nice, golden mixture that thickened beautifully while adding that extra depth that can be lacking in so many keto recipes (where that browning stage must be skipped and thickeners added at the very last second).

This recipe, as written, makes four generous servings, but it's pretty easy to double if you're feeding a crowd. And since it's pushing into winter in the non-Florida parts of the country, this soup would be perfect for a warming supper on a chilly evening.