Recipe originally published on KetovangelistKitchen.com on 1/22/21. It has been lightly edited for re-publication. 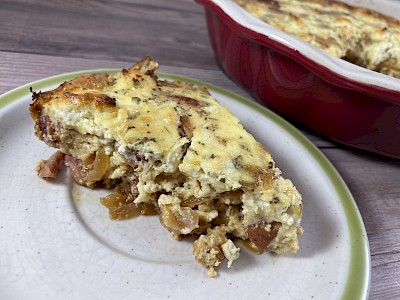 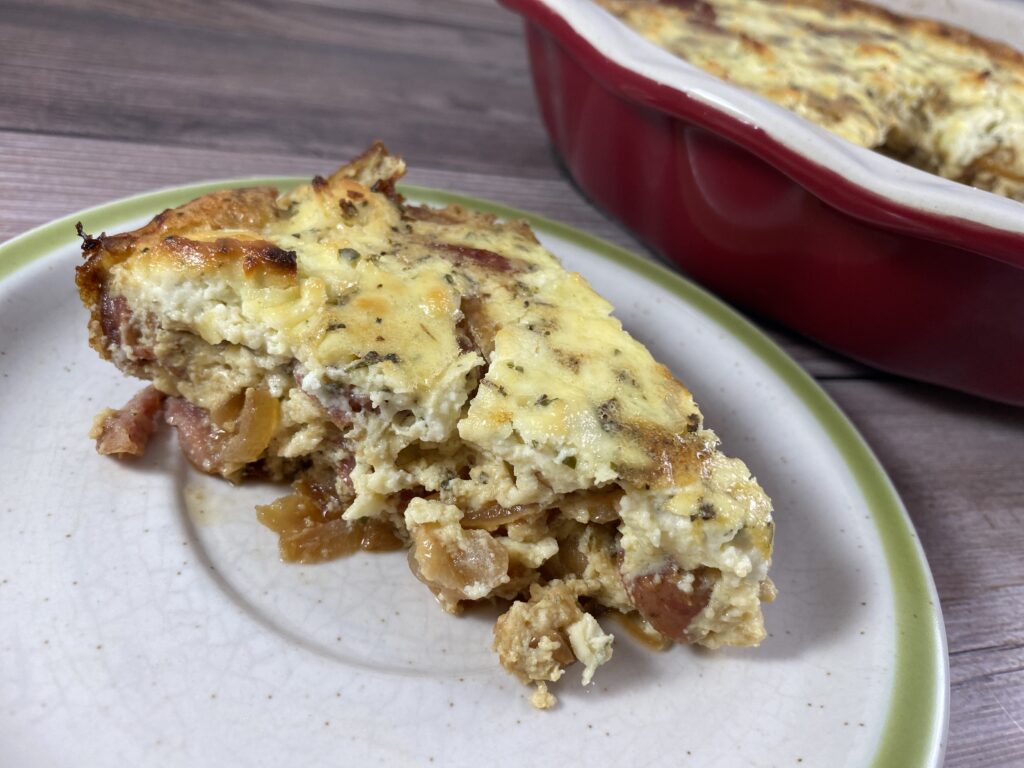 This is such a delightful dish!

Tarte à l’Oignon, or onion pie, comes from the Alsace region of France, and it’s pure country food. Traditionally, it is a pastry crust filled with a milky egg mixture, cooked bacon, and lots and lots of onions.

While it might seem like we already have some problems, if you’re willing to make some untraditional alterations, this can be recreated with a much lower carb count. One such alteration is to scale way back on the onions and leverage their taste potential by caramelizing them. That way, you get more depth of flavor for less volume. The second change I made was to use keto-friendly milk substitutes instead of whole milk. Next, was to just skip the crust entirely. And finally, I made an executive decision to use sliced country sausage instead of bacon. It’s a country dish and there is nothing more country in my home territory than smoked sausage. Consider this my Southern (US) twist on the French classic.

The end result is an incredibly soft and creamy filling with a deep savory-sweet balance. Trust me when I tell you it’s wonderful. The first time I made it, my leftover-loathing husband ate it for breakfast every day for the better part of a week... intentionally!

Notes: Yes, I used an herb blend from Provence in a pie from Alsace. No, I’m not even slightly ashamed about that. Yes, I also added cheese. No, I’m not ashamed of that, either.

The only serious note I have for you is that how much salt you want to add is really going to depend on your own taste. I like my food salty, y’all, so I typically add about 3/4 tsp. This dish does, however, already have quite a bit of saltiness from the sausage, so if you’re more sensitive to that you may want to scale back to 1/2 tsp. That tidbit is noted in the recipe.