Recipe originally published on KetovangelistKitchen.com on 11/19/21. It has been heavily edited for re-publication. 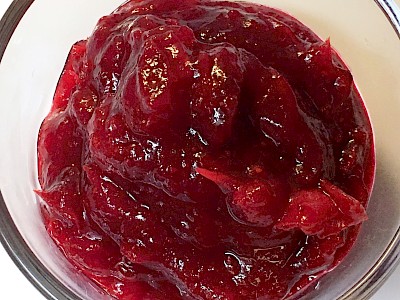 Let's face it: Xylitol, which is the best behaving of the keto-friendly sugar alcohols, is not something many pet owners like keeping around. For dogs, especially, it can be deadly, even if it's an accidental taste from a small plop that escaped your plate. Not that I expect anyone's pets to be lapping up the cranberry sauce under the holiday table, but stuff happens and animals tend to find a way into things they're not supposed to have pretty frequently. That's why guilty dog photos are a thing.

Unfortunately, when it comes to cooking with sugar alcohols, we sometimes have other pressing issues. When a sugar alcohol is heated at high temperatures and then cooled, it tends to recrystalize and become gritty or crunchy. The longer it's chilled, the worse it gets. Out of all the sugar alcohols, xylitol misbehaves the least under these conditions, which is why you can make an amazing cranberry sauce that will last up to a good 48-hours in the fridge without developing the crunchies. After that time, even xylitol will start getting gritty in your sauce, but that's only really a problem if you don't have enough guests and end up with leftovers.

So, how do we get around the need for xylitol in a recipe, like cranberry sauce, that's necessarily boiled? It's all about timing, my friends.

First off, this recipe was inspired by one of our Facebook group members, so shout out and thank you Vanda Listic for getting the wheels in my noggin a-turnin'! Vanda was looking for a cranberry sauce recipe that wasn't so heavy on the sugar alcohols, and said she preferred to use stevia. When thinking it through, I wondered if you use liquid stevia to sweeten, could you simply add it after you pull it off the burner, just like any other extract? Since the pet-friendliness issues surrounding xylitol are a frequent concern of our members, it occurred to me that a solid cranberry sauce- minus the xylitol- was needed.

So, I got to experimenting!

My favorite grocery store had bags of fresh cranberries on sale, and I happened to grab four over the last two weeks, so I pulled one out, dumped it in a pot with some water, and set it to high. When they get super hot, cranberries will burst, and they have enough natural pectin in them that all you really need to make a sauce is to boil them and sweeten. The berries do most of the work on their own.

Once my cranberry mixture began to boil, I let it go for a good minute or two, then turned the heat down to low and simmered for another five. After simmering, I pulled the sauce completely off the heat, then I added a little orange extract (cause orange + cranberry = the bomb) and stirred in some liquid stevia and started tasting.

I got to about 20 drops, then I noticed that the bitterness that stevia can add in larger quantities wasn't really complimenting the cranberries, and so I made the executive decision to add in a few tablespoons granulated erythritol. My hope was that, because the mixture was not at the boil and had already started to cool, the erythritol granules would dissolve into the warm mixture but wouldn't rapidly recrystalize during the chilling. And since erythritol isn't known for inducing death in any of our furry friends, it's the widely preferred alternative to xylitol.

After spooning the sauce into my storage container, I let it cool on the counter for a while before sticking it in the fridge to chill. At the four hour mark, when it was pretty cold, the texture was still in tact. Then came the ultimate test: chilling overnight. Will I wake up to crunchies in my sauce?

This cranberry sauce held together beautifully overnight, and continued to hold for 48-hours (the point at which my daughter had managed to devour it all). That picture up top was taken at the 48-hour mark, so you can see for yourself how well it held up in the fridge.

Some notes for you:

Personally, I like my cranberries pretty tart, and I have been keto for over three-and-a-half years now, so this small amount of sweetener is just right. The stevia extract does the heavy lifting in this recipe, and the eryhtritol in combination takes the edge off the bitter aftertaste for which stevia is so notorious.

As always, feel free to make this recipe your own, so if you don't like orange and cranberry, leave out the extract. If you need it a little sweeter, add more erythritol, a tablespoon at a time and tasting in between each addition, after it's been off the heat a good two minutes and while it's still warm. Also, keep in mind that this is a textured sauce, meaning it ain't like that jellied stuff you can slide out of the bottom of a can and slice. You're going to have some chunks of cranberries in your sauce, and it will be glorious!

Additional erythritol sweetener may be added, to taste, one tablespoon at a time after the sauce has been off the heat for two minutes. Taste in between each addition.