Recipe originally published on KetovangelistKitchen.com on 1/13/20. It has been heavily edited for re-publication. 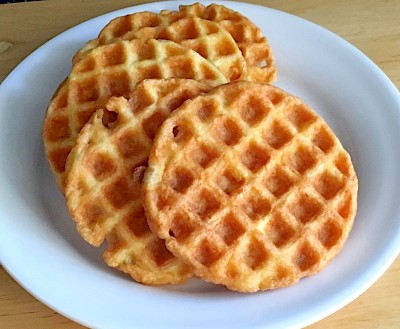 I'm gonna say something that might blow your mind: I don't like "chaffles." Every time I've made them they were incredibly underwhelming, especially considering how wildly popular they've become. While I was expecting this awesome bread-like replacement, what I got was a crispy cheese omelette that has waffle divots on its surface. Meh.

Recently, I've started a carnivore stint that is quite a bit more strict than I've done previously. That means no dairy. No cream in my coffee, no cheese on my plate. So a classic chaffle, had I wanted one, is out. But that doesn't mean the concept needs to go fully out the window.

More than a few good friends of mine are also following a very strict carnivore protocol and either can't have cheese or want very much to cut it out. They also both really like chaffles, so I decided to see how I could carnivore the chaffle up.

The first thing that has to happen is a name change. Can't call something a chaffle- a portmanteau of cheese waffle- without the cheese element. I've decided to call my cheese-less creation a womelette, because of my observations about omelettes and waffle divots. Shakespeare would be proud!

The next order of business was ramping up the carnivore-friendliness factor. That's where the bacon comes in. As we know, bacon cooks up pretty solid, so when combined with egg in the womelette mixture it "waffles" into a really sturdy bread-ish slice in just a few minutes on the Dash. Adding the bacon also gives us a really nice 1:1 fat to protein ratio for each womelette.

My picky son and his buddy from down the street were the ultimate taste-testers of my creation and they both loved it! Son's friend was so enamored of them, he ate the whole batch and then asked me how I managed to get bacon inside a waffle. Mandy Magic, little man.

Notes: If you'd like to add spices or extracts (I recommend a splash of maple here), or leave them out entirely, it's all good. Make this work for you.

One caution I do have is that, just like the original chaffles, this doesn't reheat very well. It's great right off the waffle maker, but let's be real: it's cooked egg. Eggs don't reheat into anything you want to eat, so I don't recommend making a huge batch at one time. Make as many as you and your family will eat at a time and serve immediately.