Recipe originally published on KetovangelistKitchen.com on 11/9/21. It has been lightly edited for re-publication. 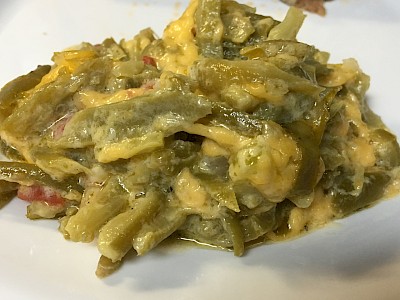 One of our favorite holiday dishes is green bean casserole. My daughter asks for it pretty much every time a special feast day rolls around. It's kind of an old standard in most homes, but unfortunately the recipe traditionally includes some very unfriendly ingredients, like cream of mushroom soup and French-fried onions. Those are, quite obviously, out on a keto protocol.

The good news is that with a few tweaks, you can have green bean casserole once again!

Credit where it's due, the major shape of this recipe is inspired by the green bean casserole from Caveman Keto. Early on in my keto journey, I tried this recipe out at a family gathering full of non-keto folks, and got a lot of positive feedback. I love the concept of substituting in a combination of mayo, heavy cream, and sautéed veggies for the traditional- and carb-loaded!- "cream of" soups, and have successfully implemented that idea in several other casseroles.

Some of the choices in the original recipe, however, were not quite the ones I would have made for my own tastes and that of my family. For starters, I'm not a fan of soupy casseroles, so the wet ingredient quantities had to come down. We need just enough to make it creamy and saucy, but not so much that it's green bean soup. I'm also not a huge mushroom eater, and so I eliminated that entirely. If you just love mushrooms, you can certainly add them back into the mix, and I would recommend doing so in equal quantity to the celery and onion so you have a good flavor balance without adding too many carbs. Most of the other changes I made were to keep or enhance the flavor, while also keeping the carb count under control.

Personally, I prefer the thinner cut, French-style green beans in my casserole, as that's how I grew up eating it. If you like standard cut better, go ahead and swap it out. Same with the cheese. Got a type you like better? Use it!

Last, but certainly not least, is the missing crunch. Leaving off the traditional French-fried onions is a must on keto, but that leaves you with a dish that's mostly mush. I fixed that by cooking the veg until it's just translucent instead of super soft, which yields a good flavor while also keeping a good deal of their natural "bite," and throwing in some chopped, cooked bacon for a little added savory goodness, and, of course, the crunch. Bacon makes everything better, and this is no exception.