Recipe originally published on KetovangelistKitchen.com on 6/7/19. It has been lightly edited for re-publication. 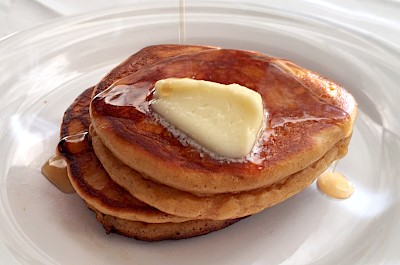 Pretty much everyone in Keto World has been on a perpetual search for a "real" pancake. You know what I mean: something that puffs and fluffs like the real thing, that isn't eggy or cheesy in taste or texture, and yet is still substantial. Good pancakes have this very odd balance between heft/substance and fluff, and I'm gonna be honest, it's darned hard to achieve with keto friendly ingredients.

Some of the versions that have been considered most successful in the community have some odd ingredients that, while they may impart something of the textural qualities we're looking for, make them taste, well weird. Psyllium husks and oat fiber (the latter of which is a super grey area product I don't use because it's essentially industrial waste...I digress) have a very odd flavor that I really just don't like. If it were just my tastebuds that were offended by these ingredients, I'd probably make them anyway because kids. But my kids are even more sensitive to weird tastes than I am, and so it was back to the drawing board.

This recipe began its life as an attempt to copy the old peanut butter, egg, and banana pancake recipe. While banana is out, I started by trying to incorporate a close textural cousin: the avocado. While the texture part worked out wonderfully, I have to say the taste was... not so much. It didn't really matter what ratio I used, the pancakes tasted like avocado. That may be a great flavor on a taco salad, but in a pancake that's a FAIL.

Eventually, I decided to try dumping the avocado all together and reconfiguring with just egg and nut butter as my base, and I have to say it turned out great! The first try was a huge hit in my house. On continual trials, I swapped out peanut butter for creamy almond butter, and the pickiest of them all, my super taster son, said they were his favorite pancakes out of all those I've ever made, including the "real" ones.

Notes: Because I like y'all, I've included ingredients for two different pancake versions. The peanut butter version went super well with Lily's chips (surprising precisely no one), but almond butter with ground cinnamon and maple extract made for an excellent flavor combination. Feel free to use the base recipe as your own starting point and mix up your flavors with extracts, spices, or add-ins.