Recipe originally published on KetovangelistKitchen.com on 1/31/19. It has been heavily edited for re-publication. 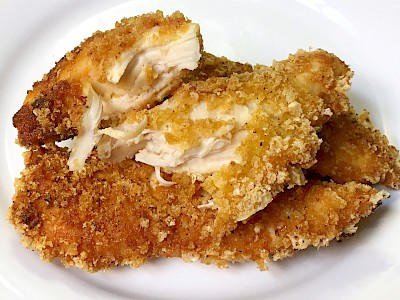 My son is, quite possibly, the pickiest child to ever walk the earth. Lord love him, he's an awesome kid, but when it comes to food he kills me. He likes no vegetables.

He likes bacon, but will only eat it if it's at just the right level of doneness. Too limp and he gags. Too crunchy and he complains that it tastes burnt. He says he likes steak, and will sometimes eat it, but if I put just a smidge too much salt or pepper on it, he turns up his nose. He loves seafood like crab, lobster, and shrimp, but that's $$$, and I'm on a budget. Don't even get me started on the numerous breads and desserts I've tried to make for him. While my daughter eats just about everything, almost nothing ever seems to taste acceptable to the boy.

Welcome to a day in the life of the Mom of a Suspected Supertaster.

In a nutshell, supertasters are people who have extra tastebuds, and this over-abundance makes them more sensitive to tastes, most especially those that are bitter. While food preferences can vary between these folks, many supertasters have aversions to strongly flavored foods, like vegetables, and tend to prefer foods most others would consider quite bland.

It's probably a bit of an understatement to say this has been a constant source of frustration in my house. With the amount of time and effort I've put into scouring cookbooks and websites, and painstakingly preparing specialty dishes, only to have everyone in the house rave about how fabulous dinner is, except, of course, for my son, who declares he "isn't a fan" in between dry heaves, it is a wonder that I have any hair left. Cause dinner time makes me want to pull it all out, pretty much every single day since his infancy, and it hasn't improved that much with age.

Chicken strips and nuggets are one of the few foods my son can be counted on to eat. I do have to be careful with the spices, especially black pepper, as even a hair too much and it's too spicy for him. As long as I'm not heavy-handed with the spice bottles, breaded chicken is a consistent winner.

As a ketonian, I obviously am not making traditionally breaded and friend chicken. So, I improvised, and what I came up with is quite special, indeed. This breading recipe gets raves from everyone who's ever tried it, including my son, who regularly asks me to make his "favorite chicken."

So, kind readers, today I will share my secret weapon breading recipe with you. It isn't exclusive to chicken, either. While I most frequently use it to bread chicken strips, it can also be used with ground chicken to make nuggets, and it makes a mean crust for chicken fried steak and fish sticks. The trick is the traditional triple-step breading.

Yes, it's a little time consuming, but the best batters, in my opinion, are always triple-dipped because it creates the sturdiest (and crunchiest!) crust. Rolling in a flour, then dipping in egg before the final dredging is a standard breading technique and it holds up significantly better than just wetting and dredging. In a non-keto forum, the standard ingredients would be seasoned flour, then egg (possibly an egg wash of some kind, which is just egg beaten with a little water or milk), and finally seasoned cornmeal or something similar. Obviously all of that, excepting the egg, is out on keto, but I managed to capture a very similar effect by using friendly ingredients such as coconut flour and crushed pork rinds.

While you may bake or air fry this, I have the best and most consistently crunchy results simply pan frying, so that's my recommendation. Also, if your palate isn't quite as sensitive, you could beat a few dashes of hot or Tabasco sauce into the egg for a little added depth of flavor.