A dairy-free family treasure for your Autumn season 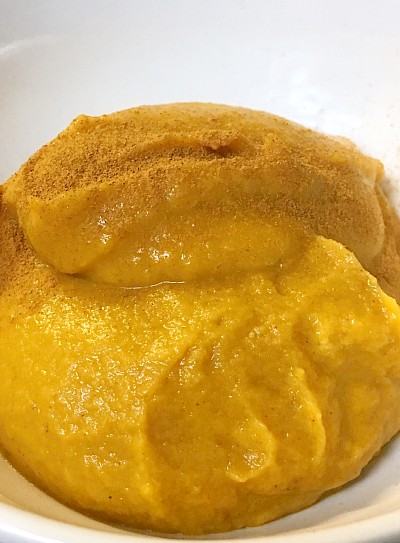 My mom makes an awesome pumpkin pie. It's my favorite, in fact. Mama, also known by my children as Marmie, came up with her pie recipe after having Thanksgiving one year with my aunt's in-laws in Pennsylvania. She has always said it was the best pumpkin pie she'd ever had.

Their family recipe was a well-kept secret, and no one would give it up. So my mom, being a very smart lady, got back to Florida and experimented. It took a few tries, but she eventually developed a pie filling that tasted like she remembered. Ironically enough, the keepers of perfect pie secrets have since revealed that what Marmie came up with was almost identical to their vaulted family recipe.

I ketofied her pie recipe years ago, but it occurred to me recently that I don't tend to make a lot of dairy-free recipes, and maybe it is about time I did so. Thus was born this Pumpkin Pudding. It is quite a treat, and the conversion to a dairy-free stovetop pudding from a dairy-filled baked custard came out so well that I'm thinking I may use this at the holidays, along with some keto spice cake and maybe some maple flavored whipped cream, to make a pumpkin spice trifle. Regardless, the conversion here was pretty easy. Instead of heavy cream, I used canned, unsweetened coconut milk. In many cases, that's as hard as dairy free substitutions ever need be.

Now, I did make this in a double boiler. For those who aren't familiar with the term, a double boiler is, essentially, a bowl that's placed inside a saucepot. They make sets, wherein the top pot fits into a groove in the lip of the bottom pot, but if you don't have one a heavy glass bowl over a larger pot will do the trick. When you place your bowl to fit over your pot, you want there to be a good couple of inches between the bottom of the pot and the bowl. The idea is you fill the bottom pot with about an inch of water, place your bowl over it, and bring the water in the bottom to a boil. This indirect heat cooks much more gently than just throwing the ingredients in a pan. You could technically do that, but you run the risk of scrambling your eggs much easier than you do if you cook it via the more gentle method.

So, for the more experienced cooks out there, if you'd like to try the quicker method of just doing it in a saucepan, hey, knock yourself out! Otherwise, I've listed instructions for making this in a double boiler to try and minimize the chances of a poorly cooked pudding.

A dairy-free family treasure for your Autumn season