Recipe originally published on KetovangelistKitchen.com on 10/9/20. It has been lightly edited for re-publication. 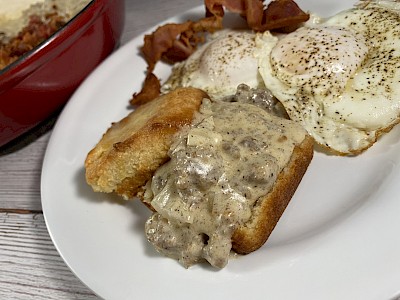 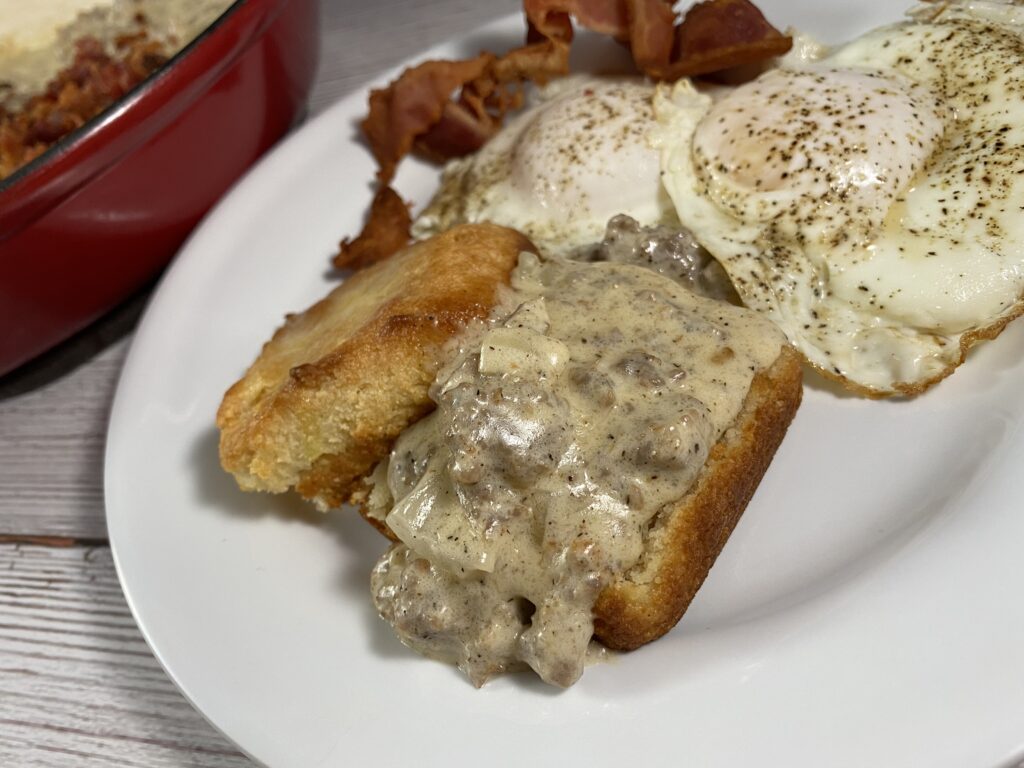 Sawmill gravy, also known as sausage gravy, is a southern staple. It gets the sawmill moniker because it’s something they used to serve at chow time in the old Civil War era sawmills and logging camps. In my very southern family, however, we served it sans sausage and called it milk gravy. Although my dad passed when I was pretty young, one of my more vivid memories of him was of making french toast (unsweetened) and smothering it with home made, peppery milk gravy. The recipe he used was handed down to him from his grandma (my Pepa’s mama), and while eating french toast and gravy may sound odd to some, it was a childhood delicacy!

Milk-based gravies are pretty simple fare. You start with a roux of flour and animal fat (usually bacon drippings but sausage drippings work, too), and then you add milk (or cream), salt, and a whole lot of pepper, then cook it down to the thickness you prefer. This recipe is almost identical to my non-keto sausage/milk gravy with some lifestyle-appropriate changes. Roux is not exactly keto-friendly, but making an authentic southern milk gravy, with or without sausage, is as easy as swapping in heavy cream for milk and adding a little glucomannan powder at the right time.

I have to tell you, while I realize that folks do the best they can to simulate old favorites, I’ve never in my life seen a “real” southern gravy that had cream cheese in it, and there won’t be cream cheese in this one, either. It’s just pure southern, sausage-and-bacon-and-peppery deliciousness. Serve it up over eggs, or with your favorite low carb biscuits (like my buttermilk-style ones).

Notes: Before you ask, please, for the love of all that is keto and wonderful, do not try to use xanthan gum as the thickener. It is incredibly easy to overdo, and tends to make hot liquids slimy and/or gummy. Trust me, xanthan gum is the mortal enemy of gravy. If you have a hard time finding glucomannan powder in your local supplement store, it’s available for a very reasonable price on Amazon, and it will last a very long time.

Real milk-based gravies should not be pasty. I know a lot of restaurants serve it that way, and so that’s what folks have come to expect. The actual thing, though, is tight but should pour and not spread.

I divided this into four, very generous servings, but if you only use a little gravy at a time you could stretch this to six or eight. I probably only eat half a serving at a time, but other members of my family will eat an entire quarter of the recipe in one sitting (and maybe go back for more!), so that is up to you and your appetite.