What Is The Ketogenic Diet?

Fat, protein, and carbs are macronutrients and are the building blocks of all nutrition.

Article originally published on Ketovangelist.com on 1/15/15. It has been heavily edited for re-publication. 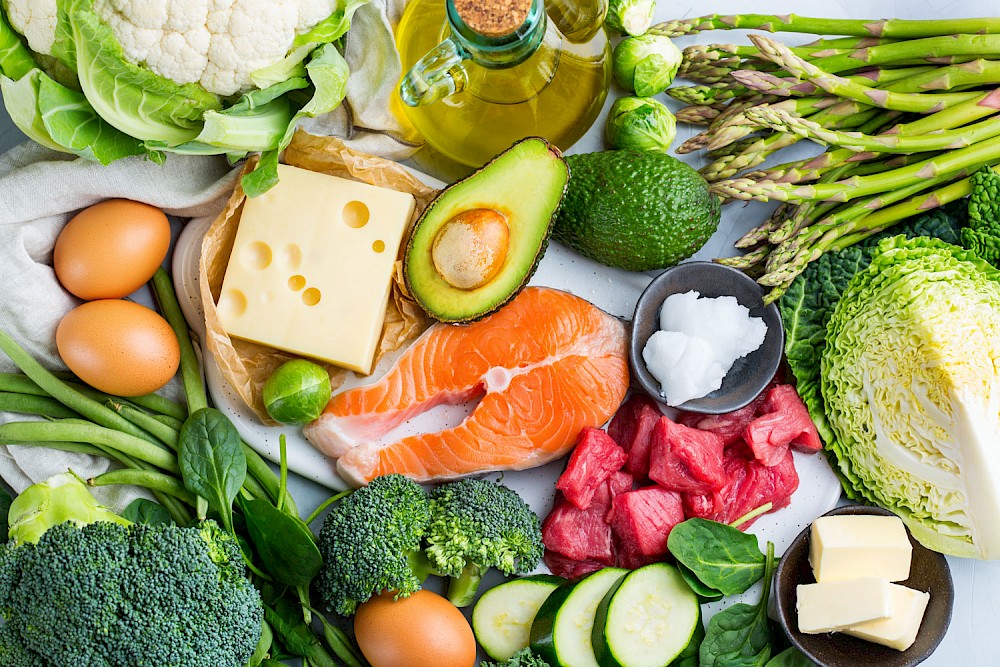 When people notice someone has lost weight, the first question they ask is, "How did you do it?" When the answer involves eating a ketogenic diet, the next question is usually, "What’s that?" We want to answer that for you today!

A ketogenic diet is one that typically has three major aspects:

In its most basic form, a ketogenic diet consists of mostly fat, some protein, and a few carbs (if any). These categories (fat, protein, carbs) are called macronutrients, and they are the building blocks of all nutrition. The reason the ketogenic diet is called “ketogenic” is because the it allows the body to shift its fuel source from glucose (carbs/sugars) to triglycerides (fats) and, in so doing, this creates ketone bodies. Ketone bodies form in three ways: beta-Hydroxybutyrate, acetoacetate, and acetone. These ketones all ultimately develop as a result of fat oxidation, and they serve to supply the body with its required fuel.

Additionally, the ketogenic diet avoids ingredients that are proven to increase inflammation, insulin, and blood sugar. Inflammation is a major underlying cause of many chronic health issues that often see relief or reversal while following a well-formulated ketogenic diet.

Does a Keto Diet Make You Sick?

When starting a ketogenic diet, there is typically a transitionary period for the body as it shifts from burning sugars for energy to burning fat. This process is called keto adaptation. The length of this transition period can be as short as a couple of days, to as long as four weeks; it depends on the person. Keto adaptation can also be difficult for some people as they initially experience headaches, diarrhea, weakness, and fatigue. These symptoms, however, typically only last for a short period of time. For the majority, these symptoms clear up within a few days and, once fully adapted, athletic and physical performance usually returns to baseline. Frequently, attentively replenishing electrolytes, especially Magnesium, Sodium, and Potassium, will help with the symptoms of this transition.

Once fat is the body's primary fuel source, the vast majority of health markers begin normalizing, and in many cases, approach optimal: cholesterol levels improve, cholesterol densities increase, blood triglycerides drop, body fat levels drop, insulin resistance drops begins reversing, type 2 diabetes becomes manageable with fewer or no medication, etc. In addition, mental acuity and focus increases as the brain is using a superior fuel source. Another benefit is that, as body fat decreases (especially around the belly), joint health and mobility increases. Belly fat cells churn out molecules called cytokines, which have one real job: inflammation. Thus, when we lose that fat around our middle, the reduction in weight coupled with reduced cytokine production and circulation has benefits that reach down into to knees and ankles, as well as up to the elbows and shoulders.

The ketogenic diet has some additional aspects that may not be considered “major,” but they are significant benefits that make it suitable for long-term and continued success:

Calories-in versus calories-out has been drummed into us for the last half-century, but the truth is that calorie counting rarely helps with long-term, sustained fat loss. Modern science has acknowledged the major impact hormonal imbalance has upon weight and health, and we are beginning to see shifts in dietary advice that discards many old diet tropes in favor of hormonal control via diet.

While many people choose to track and measure their food, for the majority it is unnecessary outside of personal experimentation and/or identifying problem foods. In general, as long as meals are seriously high in fat and contain a moderate amount of protein, the easiest way to keto is to eat low-carb foods until you feel full (which will happen quickly when you eat high fat meals) and then stop until you're hungry again.

The Ketogenic Diet Is Safe

One final but important note, to clear up any possible confusion: Ketosis is not the same as ketoacidosis. Many people confuse the terms and, consequently, mistakenly dismiss the wealth of health benefits that come from a ketogenic diet and lifestyle. As we've covered earlier, ketosis is a state in which the body uses fat as fuel which typically produces ketones (beta-hydroxybutyrate) at a rate of .5 to 5 mM. Ketoacidosis is a state of uncontrolled ketone production (generally also accompanied by the presence of high or uncontrolled blood sugar levels), resulting in ketone levels in the neighborhood of 15 to 25 mM. High levels of blood sugar and high levels of ketones is a bad combination; it forces the kidneys to work overtime, often causing kidney damage or failure. Thus, Ketoacidosis is a very dangerous situation. The good news is that ketoacidosis is a very rare condition. The population most commonly affected by ketoacidosis are those with Type 1 diabetes (and some severe alcoholics), whose bodies do not produce insulin to break down blood sugar. Generally speaking, unless you have Type 1 diabetes, it is unlikely you need to worry about ketoacidosis. If you do have Type 1 diabetes, a ketogenic diet and lifestyle is still available to you, but you will need to be diligent about your care and treatment (note: please contact your doctor to discuss this lifestyle change and any adjustments that you may need).

To recap: a ketogenic diet is high fat, low carb, and moderate protein. And you get to eat bacon.

These are the basics, but there’s a lot more to the ketogenic diet and lifestyle, including avoiding foods that will spike your blood sugar or insulin (or both). Be sure to join our newsletter to get helpful articles, community updates, and more, delivered right to your inbox. When you join, you'll receive a free Keto Food List that you can save or print to reference when planning shopping trips or meals.

Also, we'd love to have you at The Ketogenic Success Facebook group.

If you’re still not sure what to do, or you’re a keto veteran and you’re looking for some help, you should check out our coaching program. Our Ketogenic Lifestyle Coaches live keto all day, every day. We keep up to date on the latest science, too. Most importantly, we focus on your goals to help you achieve success in your keto journey. It’s always better to have someone in your corner, guiding you along, so if you’re ready for success, sign up for a coach today.

Not finding what you’re looking for? Drop us a line and let us know.