What's the Skinny on Coconut Oil?

Scary headlines about coconut oil and other saturated fats are often questionable, at best.

Article originally published on Ketovangelist.com on 6/20/17. It has been lightly edited for re-publication.

Like many of you, I woke up this weekend to be greeted with a splashy headline from USA Today boldly declaring:

Apparently, the American Heart Association has, once again, decreed from on high that saturated fats are baaaaad, mmmkay. And judging by the royal freak-out I saw over the last few days, many people have swallowed that hook, line, and sinker.

I cannot and will not give any of you, dear readers, medical advice. But I can and will tell you why I highly discount this recent reiteration of the Anti-Sat-Fat Crusaders' mantra, and you are free to make up your own minds from there.

The AHA's "Check-Marked" Foods Are Not Always Healthy

This is by far the most obvious evidence against taking the AHA's statements at face value.

I happened to be in the grocery store this morning and, for giggles, decided to take a stroll down the cereal aisle. I grabbed boxes at random, and counted no less than thirty sugary children's cereals that displayed the "Heart Healthy Food" stamp from the AHA. Boxes ranging from chocolate puffed rounds to sugar-coated mini-toasts had this stamp of approval on the side. Heck, half of them contained marshmallows. And then there is this: 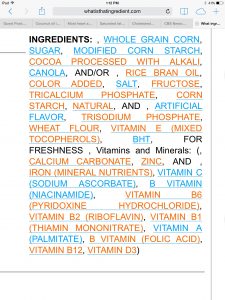 That, my friends, is the ingredients list from just one of those cereal boxes. Note the second ingredient is sugar. Then there's modified corn starch, canola oil, rice bran, fructose, corn starch is in there a second time, and artificial flavors. Also notice all those vitamins they've added in to "enrich" this product. That's basically because, no matter how much in the way of "heart healthy" whole grains they shove into this package, these cereals are nutrient deficient and they have "fortify" these Frankenfoods by adding in vitamins and minerals in order to be able to declare it a "healthy source of vitamins."

All of this is to demonstrate that anyone who insists the AHA is in the business of recommending "heart healthy" foods may also have some ocean front property in Missouri they'd like to sell you.

Questionable Connections Between the Health and Food Industries

I have written before about the scandal wherein the sugar industry actually bought influence with researchers so they could get fat declared the primary culprit in heart disease, while minimizing the role of sugar in the same.

I hate to use the word conspiracy, mainly because I'm sure as soon as it's thrown out there people start imagining me hiding out in my parents' basement with my head wrapped in tin-foil. But when we have the actual documents that show this kind of collusion and intentional obfuscation of the evidence.... well, I'm honestly not sure what else to call it.

The fact is that financial motive and influence peddling are very big factors in the health and wellness industries. We all know about "Big Pharma" but many don't realize the high degree of influence the agricultural and food manufacturing industries wield in establishing nutrition policies and guidelines. Agriculture and manufacturing both have massive lobbies in Washington, DC, and there is significant crossover between the people issuing these guidelines and affiliations with these lobbies.

(Update 6/20/17): This little tidbit was brought to my attention by a reader. Apparently, Bayer and LibertyLink Soybeans have pledged to "contribute 5 cents to the AHA’s Healthy for Good movement for a total maximum donation of $500,000." The official announcement of this financial partnership can be found here.)

The Larger Body of Research Calls into Question the AHA's Conclusions

Author and investigative journalist, Nina Teicholz has done yeoman's work in helping to expose the influence peddling that's gone on in the health industry over the past half century or more. Over at her project, The Nutrition Coalition, Teicholz has linked to sixteen meta-analyses (aka, reviews of the available research literature) that, simply put, directly contradict the AHA recommendations against coconut oil, and saturated fats in general.

Here is a taste of the conclusions from just one analysis:

“Various aldehydes produced in the oxidation of PUFAs, as well as sugars, are known to initiate or augment several diseases, such as cancer, inflammation, asthma, type 2 diabetes, atherosclerosis, and endothelial dysfunction. Saturated fats per se may not be responsible for many of the adverse health effects with which they have been associated; instead, oxidation of PUFAs in those foods may be the cause of any associations that have been found. Consequently, the dietary recommendations to restrict saturated fats in the diet should be revised to reflect differences in handling before consumption, e.g., dairy fats are generally not heated to high temperatures. It is time to reevaluate the dietary recommendations that focus on lowering serum cholesterol and to use a more holistic approach to dietary policy.”

The Evidence May Be Unreliable

The AHA claims "seven out of seven studies" all confirm and validate their findings. Which sounds very serious and convincing....until you discover that which noted health researcher Gary Taubes did.

You should read it all, but for now the nutshell is thus: (a) those studies are all from the 1960s, (b) none of them meets the standard criteria for sample size, factors studied, adequate controls, and protection against bias, and (c) they ignored a half century plus of subsequent research, documentation, and meta-analyses that do not affirm their claim, including the Women's Health Initiative, which is the largest and most extensive long-term dietary and health study ever performed on women. In fact, in addition to other problematic factors, all the studies they chose excluded women from their trials altogether, so it's curious they would choose to ignore the largest source of data on women's health that is available.

Outdated, cherry-picked data that uses highly questionable methods to obtain their results does not inspire me with a lot of confidence about this current advisory.

BONUS INFO: Cholesterol Levels Are Not a Strong Predictor of Heart Attack

As reported in the UCLA Newsroom, a full SEVENTY-FIVE PERCENT of all heart attack patients have normal cholesterol levels.

There is also a growing body of evidence that lists inflammation, not cholesterol levels, as the primary factor in heart disease and coronary events (see here, here, here, and here for examples).