A delightful crust to bring pies back onto your keto menu! 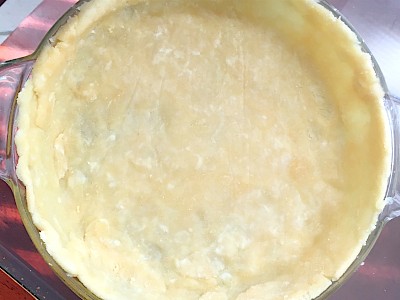 Pie crust that stretches is one of those things we ketonians have put away as part of our past lives. We are resigned to always and forever have a graham-style crumble crust, because that's all there is, folks.

Enter Tom Naughton and his crew.

Mad props to our friends over at Fathead for coming up with a pizza dough that brought stretchy dough back into style in keto world. By leveraging the stretchy-weirdness of low moisture mozzarella cheese, Naughton and company sparked a keto food revolution; from pizza crust to garlic bread to dinner rolls to cinnamon rolls, Fathead dough has been used to make a whole plethora of baked items that really need the stretch to make a good, stable, not crumbly dough.

Now, I'm going to be up front and confess that I wasn't a big fan of Fathead dough initially. But I recently decided to do some experimenting with the base to see how many different things I could make from it, and in various flavor combinations. One such example is the beauty you see above: Salted Caramel Pie Crust.

No joke, folks, it makes a legitimate pie crust. It's sturdy, not crumbly, and even crisps up the way a pie crust is supposed to. I've even managed to use it to do lattice work on a faux-apple pie (It's coming folks. Patience!).

Now, You don't have to use the Ballistic Keto Salted Caramel MCT oil powder here, as I used it mainly for flavor, but I highly recommend keeping it in. The flavor is not overwhelming but gives a delightfully "real" depth of flavor to the crust. If you choose to omit the powder, you might consider adding a very light splash of caramel extract to help simulate the same taste.

My notes are as follows:

As with all fathead-based concoctions, keep in mind that as the cheese cools it becomes less pliant. In other words, you may need to reheat the dough for 10-15 seconds on high if it starts giving you trouble during rolling or cutting.

The other thing to be aware of is that this is cheese and nuts. Yes, they're combined in a way to make a crust, but it's still composed of those ingredients, so you will need to be more vigilant about using pie shields and covers so that anything poking out doesn't burn over longer bakes. On pies with shorter bake times (under 30 minutes) it shouldn't be too much trouble, but something that takes a lot longer to cook through (like a custard, for example, which can take upwards of an hour to set in the oven), you will want to cover the tops well. In those instances, I recommend keeping the crust edges closer to the top edge of the filling, and save your fancy edge work for shorter baking beauties.

A delightful crust to bring pies back onto your keto menu!